Wallywash Pond is located in the district of Pondside, St. Elizabeth. It lies about 6 miles southeast of Black River, and a mile and a half from the Parottee coastline. It is Jamaica's largest freshwater lake, estimated to be about 1 km long.

A section of the pond has recently been developed as an attraction, with rafting, pedal boats, water cycles and a small ferry boat. For the adventurous who like to try the roads less travelled, it's a short drive from both Black River and Parottee.

The morass surrounding Wallywash is a natural habitat for a variety of birds, and the pond itself is good for fishing. The entire pond can be viewed from the hills above the Pondside Primary School, but to get close to the pond and the attraction it is necessary to approach from the more westerly road closer to Parottee.

Wallywash is also known as Great Pond, and the story surrounding its formation is one of the least known, but most intriguing Jamaican folk tales.

I must say a big thank you to Mr. Trevor Smith, who was kind enough to let me use his wonderful rendition of the legend of Wallywash Pond.

The Legend of Wallywash Pond
as told by Trevor A. Smith,
Retired Principal, Pondside Primary School

The beauty of the day camouflaged the impending doom.

Birds sang in the trees on the forested slopes, the cool sea breeze from the Parottee coastline flew overhead, and the clothes that hung on the lines beside the houses dangled. The sun shone brightly.

Fathers worked, mothers cooked, children played. The small herds nearby drank from the lonely spring, the only source of fresh water.

While there was work above, there, in its own way, nature was at work below. The spring had many sisters below who were anxious to pop up and look at the sunshine too. They ate away at the sturdy rocks that served as pillars for the lovely grounds above where humans saw it fitting for abode. It was just a matter of time before they would have below them what was now above.

With the evening came the usual activities - herding of the goats, supper, story telling, prayers, and then it was bed time.

Benjie had a way of leaving the small cluster of houses at night. He lived alone, his only companions a dog and a rooster. For some reason he had eaten all the hens. As Benjie left his home, his dog followed him. Like Benjie, he liked the night air, and what a pleasure it was to trot behind his master.

When Benjie was quite a distance from his home, he heard an unfamiliar sound. He was almost certain it came from the area in which his house was located. He was so far away that he decided finish his walk and investigate when he returned.

Wherever Benjie went, he was not one to remain overnight. On this particular evening, close to midnight, he and his dog made their way home. The night was dark but he knew the path well, and hundreds of fireflies helped with their flashing lights. A few more chains and they would be home, out of the dark shadows of the night.

Cock-a-doodle-do! "Hey, it's midnight already and that sounds like my pet cock. But why would it be crowing from that direction?"

He diverted towards the sound of the rooster, which seemed to have sensed that he was coming. Its crowing was without a break, as if giving a warning. As Benjie got close to the bird, the warning moon crept out from behind the clouds. There, much to Benjie's horror, was revealed an immense patch of water which stood where the cluster of houses had been!

Benjie gasped. His dog yelped. The cock was silent - he had played his part. It was now for Benjie to lament the watery departure of his fellow villagers. As he sat reflecting on the sound he had heard earlier, and tried to imagine how it had happened, he felt weak and sank to the ground beside his dog.

By then, the underground springs which had conspired to put below those who were above them, were now together triumphant and were gleaming in the moonlight and waiting for the sun to rise. 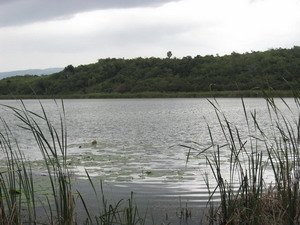 The Spaniards christened it "Laguna Sucio". We now call it "Great Pond".