Facts about Jamaica
and Jamaicans

One of the most importants facts about Jamaica is the concept of time. We are notoriously laid back when it comes to punctuality, which translates into us being notoriously late for events, appointments and life in general!

We even have our own term, "Jamaica Time", which means anything from 10 to 50 minutes or so after the appointed time (within 10 minutes is considered punctual).

On this page I'll attempt to give you a quick look at our island. Useful background information mixed with small doses of trivia about Jamaican life.

Did you know that most Jamaicans are morbidly scared of lizards of any size? Or that we like to eat the ice that's left at the bottom of our glass when the drink is finished?

Read on to learn more about Jamaica and Jamaican life.

Although so many Jamaicans live near the sea, the majority do not know how to swim.

Many of Jamaica's National Symbols were instituted when Jamaica became independent on August 6, 1962.

Click here for the words, music score and a simple vocal rendition of the Jamaican National Anthem.

Although not an official hero, the Hon. Louise Bennett Coverly (Miss Lou) is regarded by many as Jamaica's cultural hero, for her role in promoting the acceptance and celebration of Jamaican patois as a legitimate means of expression. 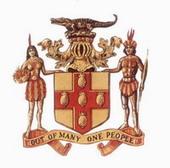 At election time Jamaicans are careful what they wear. The PNP's colour is orange, the JLP's is green.

Many Jamaicans either add H's to their words, or drop them off. Head may be pronounced "ed", and egg as "hegg".

I could exhaust you with many more facts about Jamaica, but I think I'll leave you some to discover for yourself when you visit. Come soon.

If there's anything else you'd like to know, please use the contact form on the About/Contact page to get in touch with me. I'd be happy to hear from you.

In addition to these facts, here are some useful travel tips for Jamaica.

This page gives an in depth look at Jamaica's climate.

And check this out if you want to know exactly "Where is Jamaica?"

Return from Facts about Jamaica to Real Jamaica Vacations