Black River History
There never was a town quite like this.

This page on Black River history is a personal one for me.

Here I get to draw on the recollections of my mother and grandmother, my father's collection of photos, the stories and research of friends and experienced historians, in order to tell you about a town that I love.

Black River holds a special place in Jamaica's past, and its History is worth telling.

It seems certain that before the Spanish arrived in 1494, a Taino (Arawak) occupation site was in or near what is now the town. A Taino dump (midden) was located on the coast between the Black River Spa and the present Black River Hospital. Fragments of Taino pottery could be found on this site up to in the 1970's. Further inland, in the Spring Park area, the head of a Taino axe was found by a family friend - here's a picture of it.

We are not sure how much of a town existed at the mouth of what was called the Rio Caobana (Mahogany River, changed by the British to Black River) during the time of Spanish settlement. In this period of Black River history, the Spanish in the area mainly occupied the Pedro Plains adjoining the Black River basin. There they established large cattle ranches called hatos.

Soon after the English captured the island in 1655, they took possession of the Spanish ranches on the Pedro Plains, and began to populate the Black River basin. The town established at the mouth of the river was named Black River, then changed to Gravesend. The swampy conditions and the attendant mosquitoes gave rise to malaria and cholera, which caused new arrivals to die in droves. These days, we try to treat our tourists better!

It is believed that the town was established before 1671, and the name changed to Black River before 1785. Early settlers in Black River included many Jews.

Logwood was introduced into Jamaica by Henry Barham of St. Elizabeth in 1715. It became a well established crop in the Black River basin and surrounding areas by the middle of the 1700's, and fuelled the prosperity of Gravesend, and another town further upstream, Lacovia.

The dye from the logwood and another tree called fustic was in great demand on the European market up to the late 19th century. Large quantities of the wood were floated down the river on boats called lighters. The logwood was weighed by large scales at what became known as Farquharson Wharf, and then taken out into the bay to be loaded onto large ships for export to Europe. Sugar, pimento, coffee and cattle skins were also shipped from Black River.

An important part of Black River history is its role in the British slave trade. Black River was used as a port for the unloading of enslaved Africans who had been transported by ship from West Africa. A thriving slave auction was carried out at the Town Wharf (Farquharson Wharf), one of the few such wharves to still exist in Jamaica. The famous slave ship Zong, whose captain and crew drowned 133 Africans in a bid to claim insurance money, unloaded what was left of its human cargo at this wharf in 1781. A monument to those who perished in this murderous act was erected in 2007.

Activities at the port brought great wealth to the town, which for a short time was a centre of development and progress.

The British established a fort in Black River to defend their territory from enemy ships. The present Black River Hospital stands on the site of what was the soldiers' barracks. 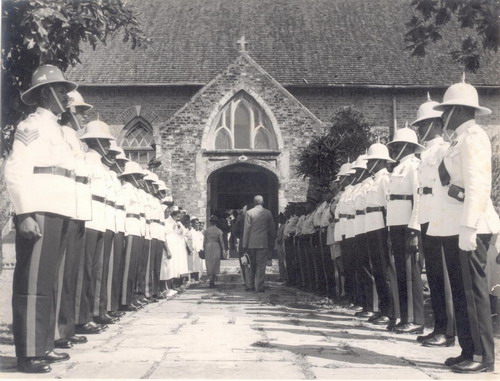 In the early 18th century, the Church of England (the state church at the time) established a church in the town square. When the first Moravians arrived in Jamaica in 1754, they found a few people worshipping at this church. It was named the Parish Church of St. John the Evangelist, and initially served the wealthy planter class. The present building has a stone in its clock tower dated 1837, but it is believed that parts of the church are much older.

A Court House was built by the mid 18th century, and this was the deciding factor in Black River rather than Lacovia being designated as the capital of St. Elizabeth.

In the early days of Black River history, the river had to be crossed by a float, which would ferry pedestrians, animals and produce across the water. Eventually an extension bridge with a wooden floor was built, followed by the present bridge which was opened in 1940. Here is a picture of the bridge under construction. 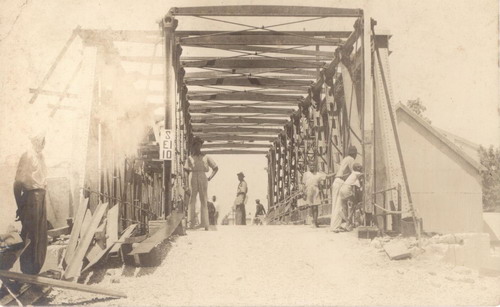 Crucial to Black River history in the 19th century were the Leydens, a family that established themselves in the area. The father, John William Leyden, is buried at Waterloo Guest House. The three sons (most references cite them as having been born in England, but records show them to be Jamaican) were John William, Charles Dominic and Thomas Patrick (TP) Leyden. This family, TP Leyden in particular, was responsible for many developments in the town. Fine Victorian houses were built by or for them along the seafront to the west of the town, which at that time had a wide sandy beach. Waterloo, Invercauld and Magdala still stand today.

In the 1890's the Leydens installed a plant (fed by logwood) to generate electricity, and Waterloo has the distinction of being the first house in Jamaica to have electric lights (1893).

The Leydens were also involved in designing the town, and established in Black River one of Jamaica's first department stores. JW Leyden and William Farquharson, partners in a local shipping company, were two of the richest men in Jamaica in their time.

My grandmother told me of Jewish families who established successful businesses in Black River. Some had been in Jamaica for centuries. A 1749 century street map of the town shows names such as Furtado, Froiz, Cohen, Isaacs. As anti-Semitism in Europe escalated in the lead up to WW1, some changed their surnames to disguise their heritage - Isaacs became Iver, Levi became Levy.

Most of the businesses lining Black River's main street were constructed so that shops were on the bottom floor, while the owners lived on the top floor.

My great grandfather (in the picture) was one of these, running a goldsmith's shop on what is now High Street. The buildings were wooden, and privacy was limited. Everyone knew everyone else's business!

(The Spa), and received the island's first licensed motor car (1903). But there were also many setbacks in Black River history.

In the mid 1700s a huge fire damaged much of the town, including the Parish Church. In 1850 a cholera epidemic struck, devastating the local population. A fire in 1932 burnt down half of the town's commercial section.

This fire, combined with declining demand for logwood dye by the end of the 19th century, the difficulties in trading occasioned by World Wars I and II, and the increased use of trucks and rather than boats to transfer goods, led to a slowing in the activities at the port. The cosmopolitan era of Black River history came to an end. 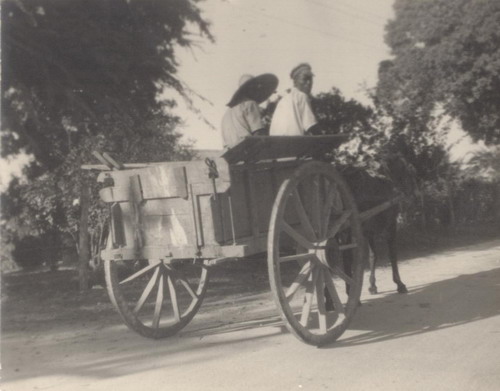 But the town has continued surviving in the way that small towns do. Without fanfare and fuss, knowing that life goes on. Black River history shows it to be a town that can survive any crisis. Although slow, development has taken place throughout the mid 20th century up to the present time, and the town now has most of the amenities needed for a simple, comfortable life. Hospital, clinic, library, banks and supermarkets, good schools, police and fire stations, post office, and of course, somewhere to pay taxes!

If any one factor will prompt Black River to rise again to its former glory, it will probably be tourism. In addition to a beautiful bay and shoreline and a formidable history, the town has an advantage that not many places in Caribbean have. A large, healthy, navigable river which gives rise to the largest wetland in the English speaking Caribbean.

Some people think the town of Black River is fast asleep. I think she's just having her beauty rest. Waiting for people to recognise that a small town can be a treasure.

Return from Black River History to History of Jamaica