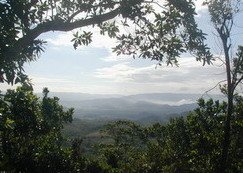 Until I visited Accompong Maroon Town, I thought I knew all there was to know about the Maroons in Jamaica. So when my kids, and a couple of friends took the drive with me up into St. Elizabeth's Cockpit Country, I was looking forward to the view more than anything else.

Turning inland at Tombstone in Lacovia, it was a pleasant 20 minute drive through Newton and Maggotty.

The last 15 minutes were challenging. The road was as awful as the view was fabulous, but my car, a true Jamaican, has yet to meet the pothole it can't handle. The bad road brought home to me how hard it would have been for the British to penetrate Maroon territory with no road at all.

That's when I realised the difference between reading history, and feeling history come alive.

We got to the town on a quiet morning. For a small fee we were taken on a guided tour around the community, and the significance of the place grew on us with each step we took. Kenroy Cawley made a knowlegable guide, knowing when to talk, and when to be quiet and let us take it all in. 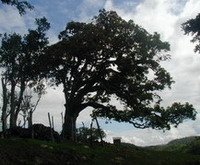 Maybe it was the Kindah tree where Kojo made his war plans, or the holy, healing Seal Grounds, or maybe just the mountain air. I can't put my finger on any one feature that makes Accompong special, you have to feel it for yourself.

Who were the Accompong Maroons?

The term Maroon usually refers to Africans who escaped slavery in the Americas and set up their own communities in remote areas.

The original Jamaican Maroons were mostly African and some Taino slaves who either escaped, or were set free by the Spanish at the time of the British capture of Jamaica in 1655. Over the next 5 years they helped the Spanish to defend the island, until the British conquest was complete. Thereafter their numbers swelled with runaway slaves from the sugar plantations.

The Jamaican Maroons spent years fighting to remain free and thwarting attempts to penetrate their strongholds. They were never conquered by the British.

A peace treaty granting the Maroons land, freedom and some autonomy was negotiated in return for the Maroons agreeing to return runaway slaves to the authorities. This created a separation between the Maroons and the rest of Jamaican society, and a sense of regret among many Maroons.

Accompong is the only Maroon settlement on the western side of Jamaica. It was founded by Accompong, who was brother ofthe famous maroon leader Kojo (Cudjoe). The settlement is located in the hills of St. Elizabeth, at the place Accompong used as a camp for carrying out raids.

The village was officially established in 1739, when the first Maroon War between the Englishand the Maroons ended. Land was granted to the Maroons, the exact boundaries of which are in dispute today.

Within the town, individual plots of land are passed down from generation to generation, with no official titles changing hands. Neither the land nor income generating activities within its boundaries are subject to government tax.

Community matters are directed by the Colonel and the council which he appoints. The Colonel is elected every three to five years. In elections held in August 2009, Colonel Peddie was replaced by Colonel F. Williams.

The abeng is the most recognised symbol of the Maroons. It is a cow's horn with the tip cut off. The Maroons sent secret war time messages by the drum and the abeng. Blowing through a square cut into the concave side of the abeng produced a sound heard for miles, which could be decoded by those who knew how. Today it is used mainly for ceremonial and festive purposes. 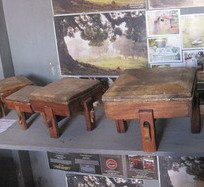 Accompong today is a farming community, with a few shops to serve the local population, and a small museum showcasing the history of the Maroons. There is also the tiny Craft and Herbs shop, selling, naturally, craft and herbs. (I'm careful to use the plural 'herbs', because in Jamaica 'herb' is something you can get locked up for selling!) The traditional Maroon Gumbay drum is sold here, along with natural remedies for many common ailments.

Every January 6, the town celebrates Kojo's Day. Hundreds gather from across Jamaica and the world to commemorate Kojo and the signing of the Peace Treaty.

On this day the Maroons share some of their cultural traditions - music, dance, drumming, feasting - with the wider society. Many of their rituals and practices are never shared with outsiders.

Why don't you come and experience Jamaica for yourself? Or if you're a yardie living abroad, come home and treat yourself to Jamaica!

Find the best deals, compare prices, and read what visitors have to say about hotels in Jamaica