Jamaican religion comes in all sizes. There's something to fit nearly everyone. If we can't find our size, it seems we just go out and start a church to suit our needs!

The country is mostly Christian, with an impressively wide variety of churches. In Black River, a small town with a population of about 5000, there are 13 churches!

Throughout Jamaica you will also find Rastafarians, and a smaller number of Jews, Hindus, and Muslims. There is African-based cult worship, although quite often adherents belong to a Christian denomination as well.

This page on religion will provide a look at the spread of Christianity, which forms so integral a part of Jamaican culture.

Jamaica's first encounter with Christianity came in the form of Roman Catholicism, introduced by Spanish settlers who arrived in the island in 1504. When the British captured Jamaica in 1655, the Church of England (later called the Anglican Church) became the state church.

Initially, other denominations were tolerated. But as the slavery and the plantation system progressed, only the Church of England, which was the church of the planter class, was allowed to function freely.

Despite efforts of the church heirarchy in England to have the local church instruct slaves in Christianity, the Church of England in Jamaica almost totally rejected slaves throughout the 18th century. 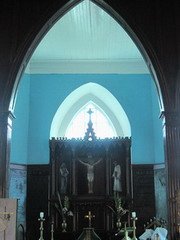 In 1754 the Moravians landed in Black River as the first missionaries, and devoted themselves to the conversion of Jamaica's non-white population. They were followed by other groups - Baptists in 1783, Methodists in 1789, and Presbyterians in the early 19th century.

Because these non-conformist denominations preached a message of equality for all men, they met with extreme and at times violent opposition from the slave-owning class and the state church.

The fears of the plantocracy were well founded, as the message of the missionaries (who were both black and white) became a catalyst for the eventual abolition of slavery in 1834, and emancipation in 1838.

The Church of England attempted reforms when emancipation was imminent, but for the most part it was rejected by the slaves that it had previously alienated.

After emancipation, it was primarily the missionary churches that helped to resettle and educate the newly freed slaves.

In 1860-61, a period of intense religious activity occurred in Jamaica. It was called the Great Revival. It started in the non-conformist churches, using vibrant evangelism to spread Christianity throughout the country.

In this time of religious fervour, African elements and rituals (which were still entrenched in the lives of the ex-slaves) intermingled with Christian beliefs, and the outcome was a genuinely Jamaican religion called Revival. It features spirit possession, and music as a central feature of the worship exprience. The two branches of Revival are known as Revival Zion and Pukumina (Pocomania).

In 1872 the Church of England was disestablished as the state church. It redeemed itself somewhat by being responsible for the establishment of some of Jamaica's best schools, and now embraces individuals from all levels of society. 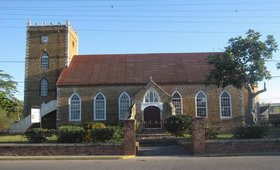 The largest single denomination in Jamaica today, the Seventh Day Adventist Church, came to Jamaica in 1894. It has made a name for itself in education, with the establishment of the Northern Caribbean University (formerly West Indies College) in Mandeville.

The Pentecostal movement started in Jamaica from about 1918. It blossomed in the 1940's when missionaries from America came to the island during an upsurge in American Revivalism.

Pentecostalism appealed to the poor who had been alienated by the established churches. It was also attractive to Revivalists who identified with their vigourous stlye of worship. It is not a single denomination - it encompasses many fundamentalist groups that interpret all of the Bible as literal truth, and emphasise the experience of the Holy Spirit.

Throughout the late 20th century and into the 21st century, many more churches and denominations have been established. These are often movements that break away from previously established churches. Many start out as Crusades, held under a tent. The tent may stay up for months, to be replaced by a simple building, usually made of plywood. Then in a few years a more substantial structure may be built.

The style of worship in Jamaican religion varies from very reserved to non-stop action! Despite male dominated leadership in most churches, congregations are predominantly female.

Although the Seventh Day Adventists (who worship on a Saturday) are the largest denomination, they are far outnumbered by Sunday worshippers, most of whom belong to the Pentecostal movement.

The non-fundamentalists such as Anglicans, Roman Catholics, Moravians, Baptists, Methodists and the United Church still maintain a strong presence although they are generally on the decline.

Jamaican religion today, as far as Christianity goes, is a true lesson in diversity. It has played a pivotal role in Jamaica's history and continues to influence our society today.