Climate for Jamaica
It doesn't get much better than this!

When God was choosing a climate for Jamaica, I believe He looked at all the hardships we would have to endure over the years, and decided to ease us up by giving us sunshine and warmth all year round!

Throughout all the seasons, it is possible to go to the beach, as most Jamaican days are warm and sunny. We don't usually refer to our seasons as the usual "Spring, Summer, Autumn and Winter", but rather as "Rainy or Dry Season", or according to the fruits which are bearing - "Mango Season", or perhaps a holiday -"Christmas Season". 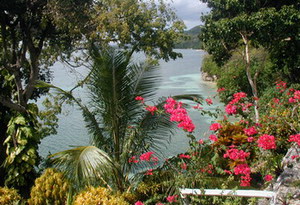 The official name given to the climate for Jamaica is a Tropical Marine Climate. "Tropical", due to the fact that we are located in the tropics at roughly 17 degrees North, and "Marine" because all of Jamaica is influenced by the sea, which completely surrounds our island.

There is little variation in temperatures throughout the year, due to the moderating effect of the warm seas.

The hottest months are July and August, during which time temperatures on the coast will be mostly in the 90s (Fahrenheit). The coolest months are December through February (especially February). During this time Jamaicans may have to bundle up, as our bodies don't easily tolerate temperatures in the low 80s and high 70s.

A few Decembers ago, the temperature in my town, Black River, did the unthinkable - it fell to about 69 degrees. To us, this was the equivalent of a trip to the Arctic!

The climate for Jamaica is also influenced by our imposing mountains, which run from east to west across the centre of the island. The Blue Mountains in the east are our highest, climbing over 7000 ft. On the highest reaches, the temperature averages around 69 degrees, dipping as low as 50 degrees during the colder months. 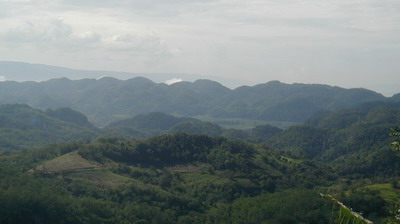 While our temperature tends to be fairly consisitent throughout the island, our rainfall is not.Again, the mountains exert their influence. Parishes to the north (particularly the northeast)of the island recieve a lot more rainfall than those to the south.

The prevailing winds that influence Jamaica are the North East Trade Winds, which carry moisturefrom the sea. As the winds reach the island from the northeast, they soon have to climb over the Blue and John Crow Mountains.Temperatures fall as the winds rise, causing the moisture to condense, and rain to fall. The parishes of Portland,St. Mary, and northern St. Thomas receive a lot of rain as a result. Some of these mountainous areas recieveover 200 inches of rain annually.

By the time the winds cross the mountains to reach theparishes on the south, they contain a lot less moisture. As a result these parishes receive a lot lessrain than those in the north. The plains on the south are the hottest, driest parts of the island, somereceiving as little as 35 inches of rainfall each year. 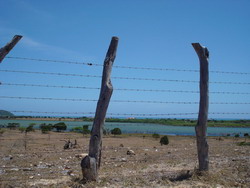 Most parishes have two rainy seasons - May to June, and September to October. Outside of the rainy season, most showers occur mainly in the afternoon, and are of a short duration. The smell of the afternoon rain on warm Jamaican soil is a wonderful sensation. Jamaica is driest from December to March.

Relative humidity is fairly high, the average percentage being in the 70s.

The official hurricane season is from June to November, but the years in which Jamaica has suffered direct hits by hurricanes have been few. So visitors should not write off coming to Jamaica during those months, as hotel rates and air fares are a lot cheaper at that time.

Winds on the north coast are usually from the east northeast during the day, averaging 15 knots, but often reaching a maximum of 23 knots during June and July. In the night, they are more from the south (from the land), averaging 5 knots.

On the south coast, day time winds are usually east southeasterly, averaging 18 knots, but reaching a maximum of 23 knots during June to July. During the night, they average 7 knots, and come more from the north.

Those of you who have to endure long, cold winters know how even one ray of sunshine can lift the spirits. Here in Jamaica, we get our rays so often that it's no wonder we are a very spirited people!

Of course, that's possibly due to the good spirits that we sell by the bottle, but maybe I shouldn't go there - after all, I am supposed to be writing about the climate for Jamaica!