In the 1930's, the notion of a Jamaican scientist was almost unthinkable. Especially if that Jamaican was not white. No surprise then, that few believed that TP LEcky could do what he set out to do - develop a a fully Jamaican breed of cattle in his lifetime.

Thomas Philip Lecky was born in 1904 in Portland, Jamaica on his father's farm. The farm produced most of the food the family ate, as well as bananas which were sold as a cash crop. He was a curious child, always seeking answers for himself when his questions were not answered to his satisfaction. Against this background, his love for reasearch was born, and a great Jamaican scientist had his beginnings.

Lecky enrolled in the Farm School at Hope in St. Andrew. It was the first agricultural school to train black people in colonial tropical countries. The school was lead by HH Cousins, an exceptional white expatriate who devoted his life to the cattle industry in the early 20th century. Training under Cousins, who transcended the accepted colour barriers of the day, Lecky was able to gain invaluable knowledge and experience which prepared him for the research which would become his life's work.

Lecky left the Farm School for Canada, where he pursued degrees in Agriculture and in Animal Husbandry. In his book "Cattle and I", Lecky recounts the day when the seeds of nationalism were first sown inside him. The West Indian Cricket Team was playing in Britain. A professor of Genetics said to Lecky, "You cannot call the Negroes a great race because they are brilliant at the start but poor at the finish". According to Lecky, from that day he decided to do a job for his country and see it completed, even if it meant devoting his whole life to it. The Jamaican scientist had become a patriot.

He returned to Jamaica in 1934. He was confined to lesser jobs because he was not white, although he was qualified to take a job with the government as an Agricultural Officer. He knew that this was the position which would give him enough autonomy to carry out the breeding work he had planned. 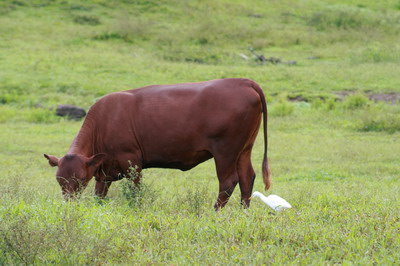 He got his chance in 1942, after the racist barrier had been somewhat shaken by island-wide labour riots in 1938, and the outbreak of World War 11 in 1939. He was given the opportunity to take over the breeding of cattle at the Hope Farm. Lecky's idea was to use line breeding, a radical departure from the cross breeding model which had been used by HH Cousins and others in the field.

As told by Lecky, he was convinced that the development of cattle in Jamaica was dependent on his being able to produce a new dairy breed. He had as his model and inspiration the development of modern Jamaicans, people who were originally crosses of pure white and pure black.

Lecky contended that the continued interbreeding (linebreeding) of the resulting mixed offspring had produced a capable and adaptable Jamaican people, without the consistent introduction of either pure white or pure black (cross breeding) in successive generations. He, and so many Jamaicans known to him, had been able to surpass whites in their own environment while at university. Based on this, he was sure that a wholly Jamaican cattle breed, superior to the purebreeds and their crosses, could be developed.

He wanted to create a new breed, based on foreign cattle, which would not behave like hybrids or crosses, and would be able to reproduce on their own. To doubt the success of his model would be the same as doubting the success of the Jamaican people.

After getting the job at Hope, Lecky had to face the fact that anyone with black blood would not be recognised as a Jamaican scientist. Research papers that he tried to get published were refused on the basis that the name of his white superior (who did not even know that Lecky was doing the work!) did not appear on the papers.

Lecky suffered through many such attempts to credit his work to others, to frustrate him, sabotage his work and block him from promotion.

In 1949, he applied for and was given study leave to do a PhD in Genetics at the University of Edinburgh. He did not realise that his superiors saw his absence as a chance to derail his breeding work. He used the research he had been doing at Hope as the basis of his thesis "Genetic Improvement in Dairy Cattle in the Tropics". Dr. Lecky returned with his PhD in 1951.

Despite obstacles and challenges, TP Lecky was successful in creating a new dairy breed, the Jamaica Hope, and having it recognised and registered by 1952. He was also pivotal in the establishing three Jamaican meat breeds - the Jamaica Brahmin, the Jamaica Red, and the Jamaica Black. The establishment of these Jamaican breeds vastly improved the productivity and economic situation of the small farmer in Jamaica, which had been Lecky's primary motivation for his work.

TP Lecky's work became a standard for breeders in the tropical world. In recognition for his role as an incredible Jamaican scientist, he received Jamaica's highest civilian honour, the Order of Merit. He retired from government service in 1965, but continued to act as a consultant up to shortly before his death in 1994.