Jamaican English
Not the Queen's English! 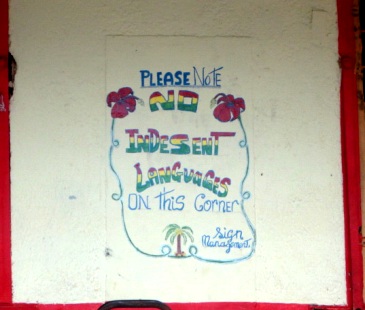 I think of Jamaican English as the default setting in my household. It's what we use between family members under normal circumstances. But when we are excited, upset or agitated, we rely more on Jamaican patios to express ourselves. Now that I've said that, I'm now beginning to think that maybe patois is the default. Hmmm... something to think about!

I've been told by my daughter that I better qualify what I mean by Jamaican English, as there are definitions which are used by scholars, and she doesn't want her mother looking ignorant all over the internet. Well, it's not Standard English, which is what I try to use when I write, for the most part.

Maybe the best way to explain is by using examples - the same phrase expressed in English, Jamaican English and Jamaican Patois. Sometimes the phrases will be the same, but often they are quite different.

English: Courtney has a new book.

A plural verb may or may not be used with a singular subject.

In patois, the article "a" is often replaced by "one"(wah). Singular verb is rarely used.

English: I am late for work.

Jam English: A late for work.

The past tense is often ignored.

The word "did" may be added to the present tense of the verb to form the past tense.

English: She threw the ball into the bush.

"Mi a" is used to indicate an action that is taking place, replacing "I am".

Prepositions are sometimes omitted. In the example below, both the "are" in the compound verb "are going" and the preposition "to" are left out.

English: Are you going to church?

Patois: Yu a go a church/chuch?

English: She is not here. She is gone to the market.

Jam English: She not here. She gone market.

Patois: She nuh deh ya. She gone a market.

I could go on and on, but this page isn't about to engage in a full blown language lesson. Suffice it to say that not many people in Jamaica speak standard English. Most speak patois, or a combination of patois and Jamaican English. If you think about it, some of us are actually tri-lingual! And we switch from one to the other without thinking, as the circumstances dictate.

Want to talk like us? Proceed at your own risk!