Traditional Jamaican drum types have predominantly African origins. During slavery, drumming was often banned because the whites were irked by the "heathen" sound of the drum, and feared its power. The drum was used by the slaves to communicate in ways the whites could not understand, and so could be used to incite unrest and cause revolt.

But no amount of prohibition could permanently silence the sound of the Jamaican drum. Drumming played a vital part in the slaves' recreation, in their worship, in their celebrations. When necessary, drums would be dismantled after use to avoid detection by the authorities.

It is in the area of folk music and our traditional folk forms that African derived drums and drumming have retained their supremacy.

Let us take a look at the major African - Jamaican drum types and their uses. 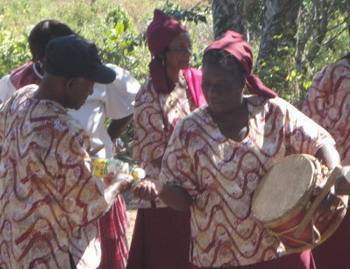 These three drums originated in Buru music - a recreational dance and drumming style derived from Africa. Buru has had a great influence on Rastafarian nyabinghi drumming, in which the three drums are collectively known as The Harp.

The Bass drum (also called "Thunder") is a double-headed drum, played with a padded stick. It underpins the music with a steady, regular stroke on the 1st and 3rd beat. The bass player will occasionally syncopate the stroke.

The Keteh (or Repeater) is the smallest of the three, and the highest in pitch. It too is a single-sided cylindrical drum played with the hands. The keteh player plays on the 2nd and 4th beat, and does a lot of improvisation. 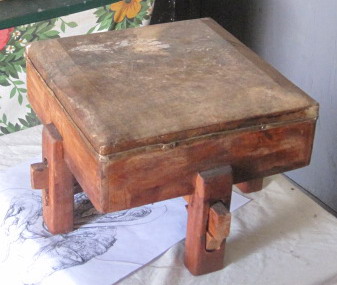 The Gumbeh is a single-sided square Jamaican drum on legs, used mainly by the Maroons. It is built with a smaller drum hidden inside (called "The Inner Baby").

The picture below shows a Maroon Repeater. 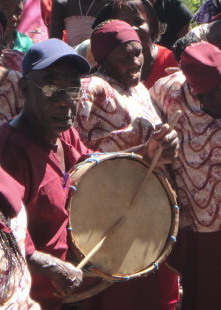 And here's a Maroon Bass: 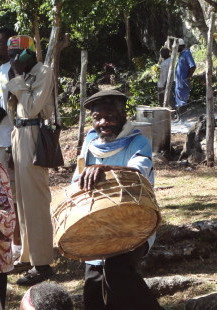 Kumina is considered to be the most African of all the Jamaican folk forms. It is a dance ritual that has both sacred and secular elements. On its sacred side, it focuses on communication with ancestral spirits, with spirit possession being a manifestation of this communication.

The Kumina tradition is strongest in the parish of St. Thomas, where it was originally practised by African indentured labourers who came to Jamaica after the abolition of slavery.

Before Kumina drums are made, libations of rum are poured to appease the spirits of the wood and the goat skin. Newly made drums are consecrated by rubbing rum (and sometimes sugar water) into the drum skin.

Drummers sit astride the drums, and use their heels (well as fingers and hands) to change the pitch and tone of the drums. A second player sits at the back of the drum and plays a different rhythm on the side of the drum with sticks known as "katta tick".

The Kbandu (pronounced "bandoo") is considered to be a male drum. It is about 20 inches long, and about 14 inches in diameter. It is a single sided drum played with the hands.

The Playin Kyas is considered female, and is higher in pitch. It resembles the Kbandu, but is a bit smaller. The player executes more complex rhythms than those of the Kbandu. The rhythms of the Playin Kyas are used to summon the spirits generally, and also to communicate with specific spirits. Different rhythms will call different spirits.

In former times the Tambu drum functioned similarly to Kumina drums - it was used to communicate with ancestors long gone.

The drum gave its name to dance music in the parish of Trelawny, where indentured Africans also settled. Kumina and Tambu both seem to share Congo origins, but Tambu is now done mostly for entertainment.

The main player sites astride the drum, uses the heel to vary pitch while playing with the hands, while another player beats katta sticks on the side of the drum.

These drums are found widely throughout the Caribbean.

The Djembe (prounounced "jimbeh") is shaped like a goblet, is single-headed, and comes in different sizes. Bongo drums are played in pairs, held between the knees. Conga drums are tall cylindrical drums, open at one end. All are played with the hands. Congas are sometimes played in twos or threes, with sticks.

The Jamaican drum has come a long way in terms of being accepted by society. Traditional drums are now widely used to accompany singing in Roman Catholic and Anglican (formerly Church of England) services. That would have been absolute heresy in colonial times!

I find the rhythms of our traditional drums mesmerising. They take me somewhere that feels slightly outside of myself - a great feeling, but a little scary! No drugs needed, high from the beat.